A Tour of Abbotsbury 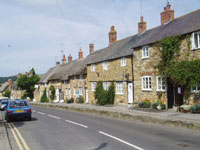 The car park in Rodden Row is our start point for a circular walk round the village centre. Almost all the buildings you will see are listed, some of them Grade I, and many of them make use of stones from the Abbey that was demolished in Tudor times. Rodden Row symbolises Abbotsbury history: 17th century thatched cottages behind high pavements facing Victorian terraces built by the village’s owners between 1850 and 1890. Several of the cottages have been turned into businesses since the 1970s: one of the galleries was an Estate workshop, and the 19th century studio began life as a reading room for the men of the village. 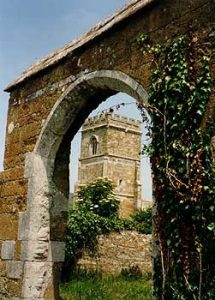 At the corner, turning left will take you past the Manor House, the Parish Church, Abbey remains and Tithe Barn, before leading to the Swannery ~ but this tour turns right into Market Street, where several former businesses have turned back into homes. The butcher’s shop, though, has been trading under different owners for around a century. Here, the houses are again all Grade II listed. 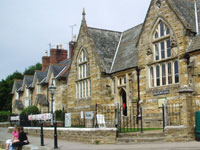 Market Street opens out to form the centre of the village, dominated on one side by the Ilchester Arms and on the other by the Strangways Hall, once the village school. The square is where the village market was first held in 1271, continuing, as St Peter’s Fair, until early in the last century. Beyond the café and gallery, the houses represent a couple of centuries in age and style, while across the road is a terrace built by the Strangways family in mid-Victorian times.

Market Street ends at the little turning on the left marked Chapel Lane. If you follow the fingerpost for a diversion, the lane takes you up the (fairly easy) climb to St Catherine’s Chapel. Chapel Lane is now the location of the village Post Office, in buildings that in 2006 replaced a pottery that had previously been a dairy farm, an example of how Abbotsbury has changed over the years. 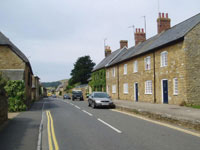 Continue along West Street, where the older buildings are survivors of a disastrous fire in 1784. Look out for evidence of buildings that have changed their use, if not their appearance, including the cottage that houses Abbotsbury Stonework and the barn now used by Barford Sails. To your left there are glimpses of St Catherine’s Chapel, and the cricket pitch named by Wisden as one of the most beautiful in the country. West Street leads out of the village to the Sub-Tropical Gardens and Chesil Beach. 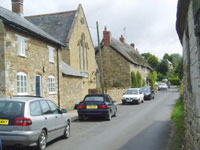 Returning to the square, cross to Back Street, lined by cottages, some of which are less than 50 years old. The Estate tries to ensure that new buildings in the village blend in, and that redundant buildings are found a new use. Half way along Back Street, Blind Lane leads uphill to the ridgeway. At its entrance is the tiny old workshop where a one-time thatcher used to make spars, the lengths of split hazel used to hold the thatch in place.

Turn right at the junction, go down Rosemary Lane, and cross Rodden Row back to the car park.