The Candles on St Catherine’s Hill, Abbotsbury, event takes place on 20th November 2022 when the decorated bags are placed during the day in a circle on the hill and along the pathway leading to the Chapel. They are lit by LED candle bulbs and are left glowing all night to form an amazing spectacle all night.

The service either inside or outside St Catherine’s Chapel, will start at 3.45 p.m.

The project is being run jointly by ATTA and Friends of St Nicholas.
Led by: Julian Andrews, Gard Gawor, Helen Millard, Barbara Laurie

St Catherine of Alexandria is the patron saint of the chapel on the hill in Abbotsbury.
We celebrate on the nearest convenient Sunday to St Catherine’s Day, 25th November.

Everyone is invited to buy a lantern bag @ £2 from local shops or the organisers. Please telephone Barbara Laurie at 01305 871532 (email thcbar1@gmail.com) for more details, or watch this page for continuing updates. 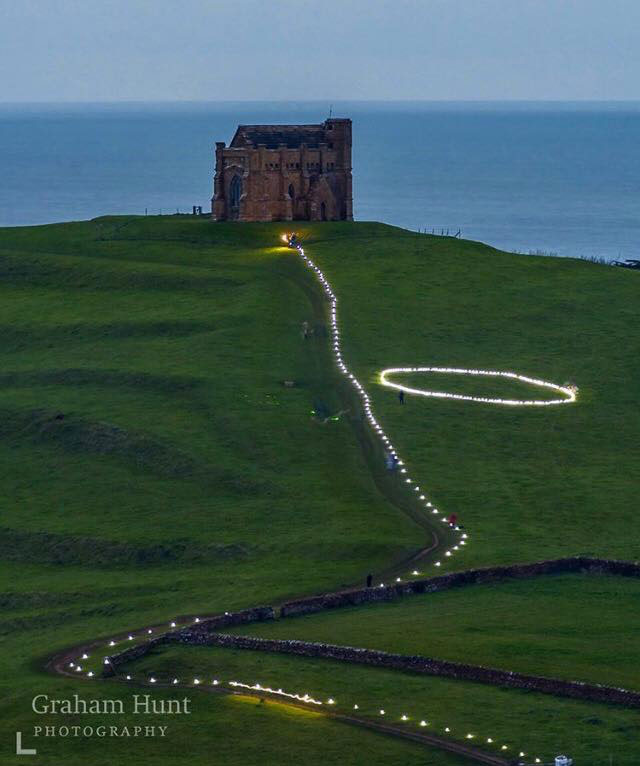 Reporting Candles on the Hill on 21st November 2021

The 2021 project was run jointly by ATTA and Friends of St Nicholas.

The event happens each year on the nearest convenient Sunday to St Catherine’s Day.

St Catherine of Alexandria is the patron saint of the chapel on the hill in Abbotsbury.

It is always windy and cold on St Catherine’s Hill, and this year proved to be no exception.

On Friday 19th November the sand to stabilise the bags arrived, provided and delivered by our sponsor Doonans, of Weymouth.

On Saturday 20th November a small group went up to mark out the circle for the lanterns.

On Sunday 21st November a larger group of volunteers started to place the bags on the circle and along the path toward the chapel. The wind was so strong and icy that the lantern bags were folded over right away, but in spite of that we displayed a total of more than 450 colourful lantern bags to light the path to the Chapel and to form the circle representing St Catherine’s wheel.

220 of the lantern bags had been beautifully decorated by the children from three local schools, Chesil Bank Pre-School, Portesham School, and Thorners. The rest were produced by the local community who had bought them from the village shops or at the Lantern Workshop which I ran on the same day as the event. It was wonderful to have such an assortment of images and words, and to experience the collective creativity and imagination.

Our Vicar, Margaret, conducted her service outside the Chapel in the dry but driving gale. Forced by restrictions relating to Covid, issued by English Heritage, the public was not allowed to congregate inside the building. There was a crowd of over 50 people who joined her at the top of the hill.

This was the first collaboration with local schools for the COTH project and we thank the children and staff so much for working with us. All their contributions were very much admired. We hope very much that these three schools will join us again next year, and if it is possible to gain sufficient sponsorship, we may be able to invite more local schools.

Sponsorship to make this event possible this year was provided by:
Beachcombers, CBPC, Doonans, Ilchester Estate, Chris Wade and Barbara Laurie, and one donor who remains anonymous 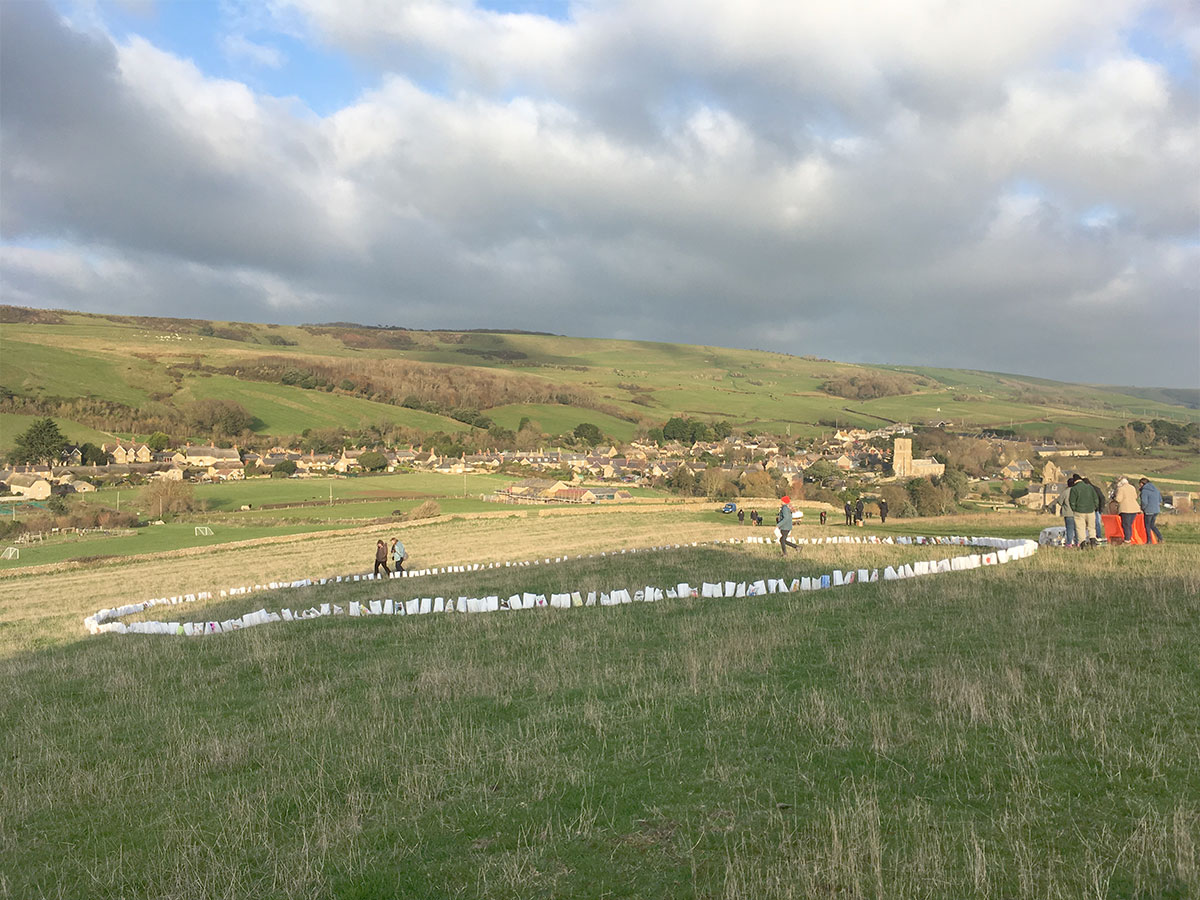 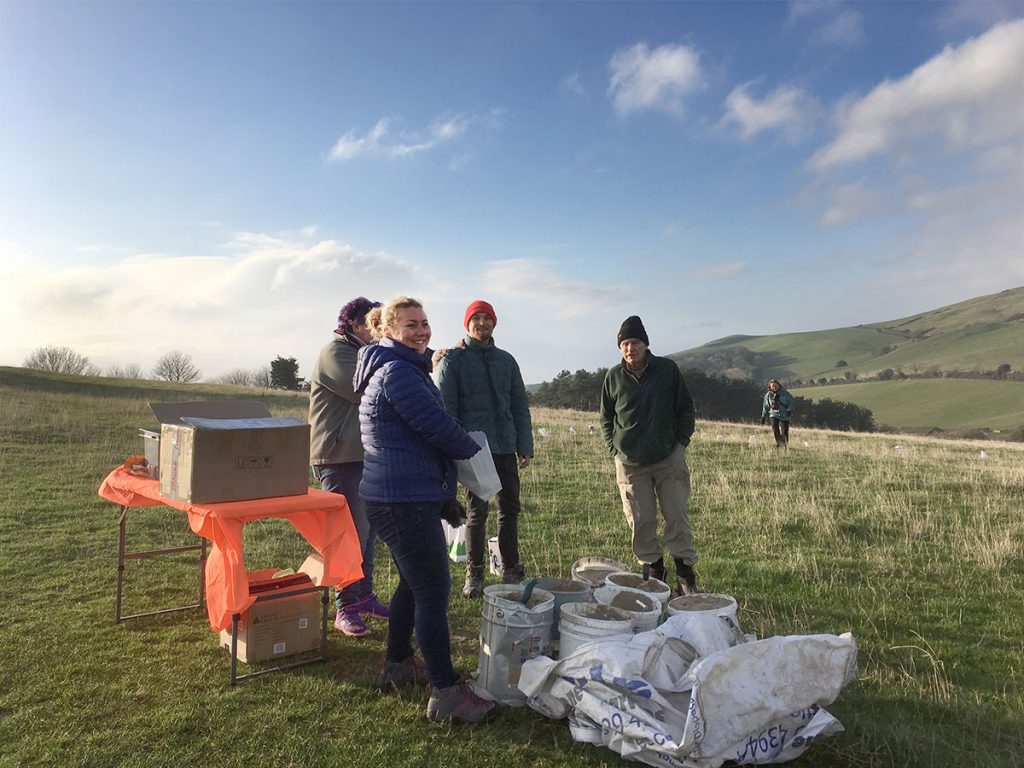 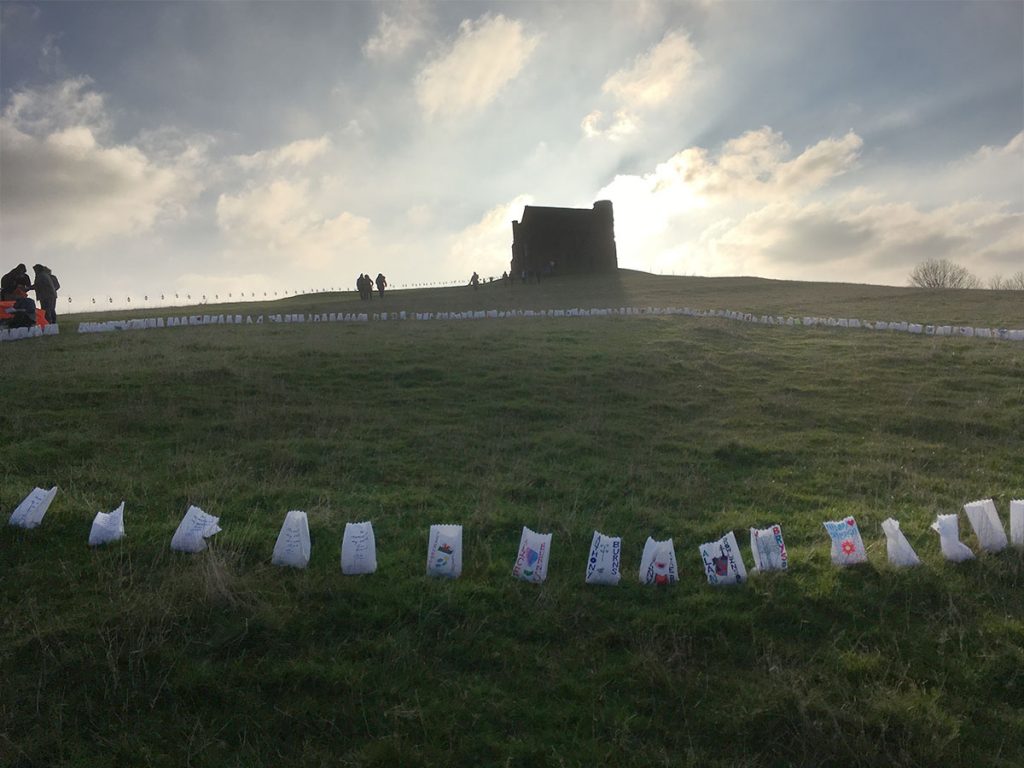 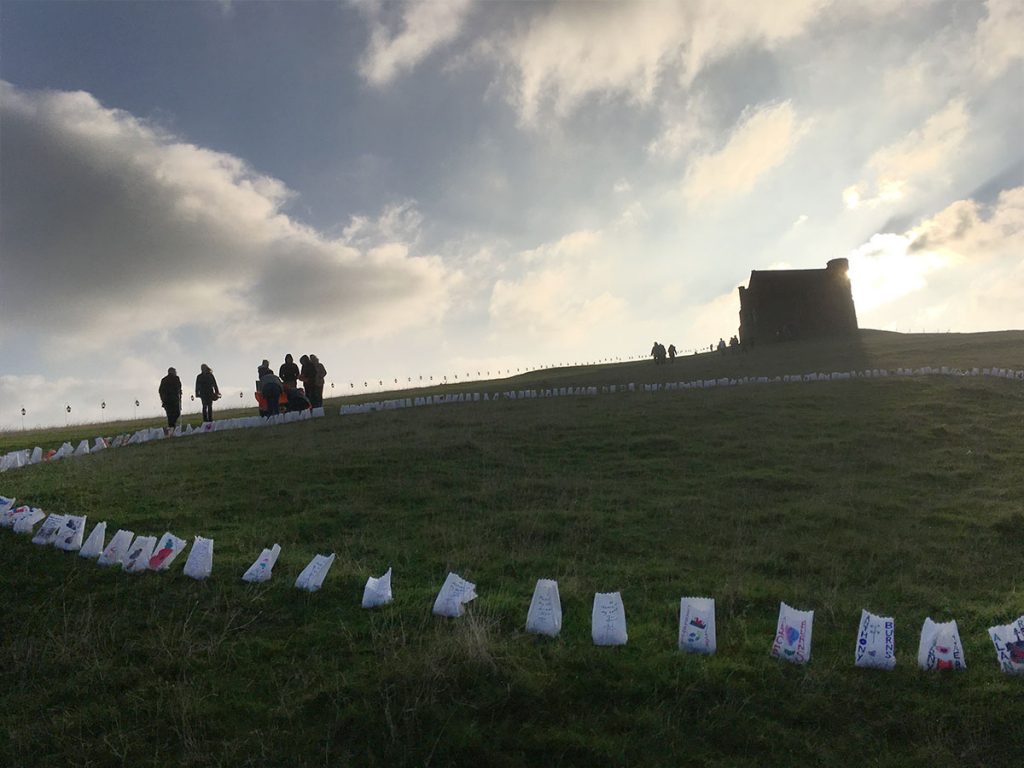 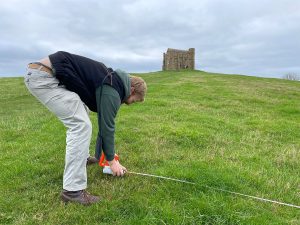 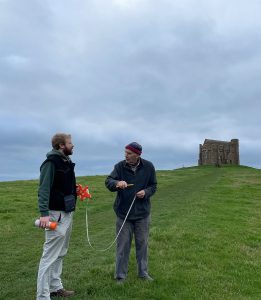 Casper and Peter getting ready to mark the circle 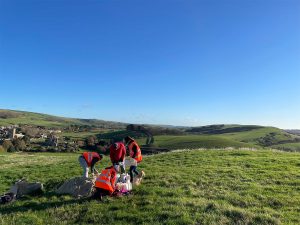 Putting sand into each bag 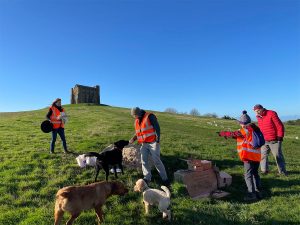 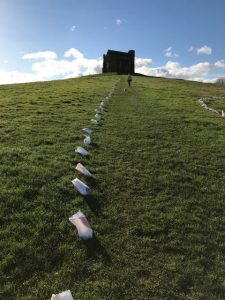 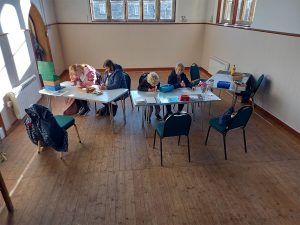 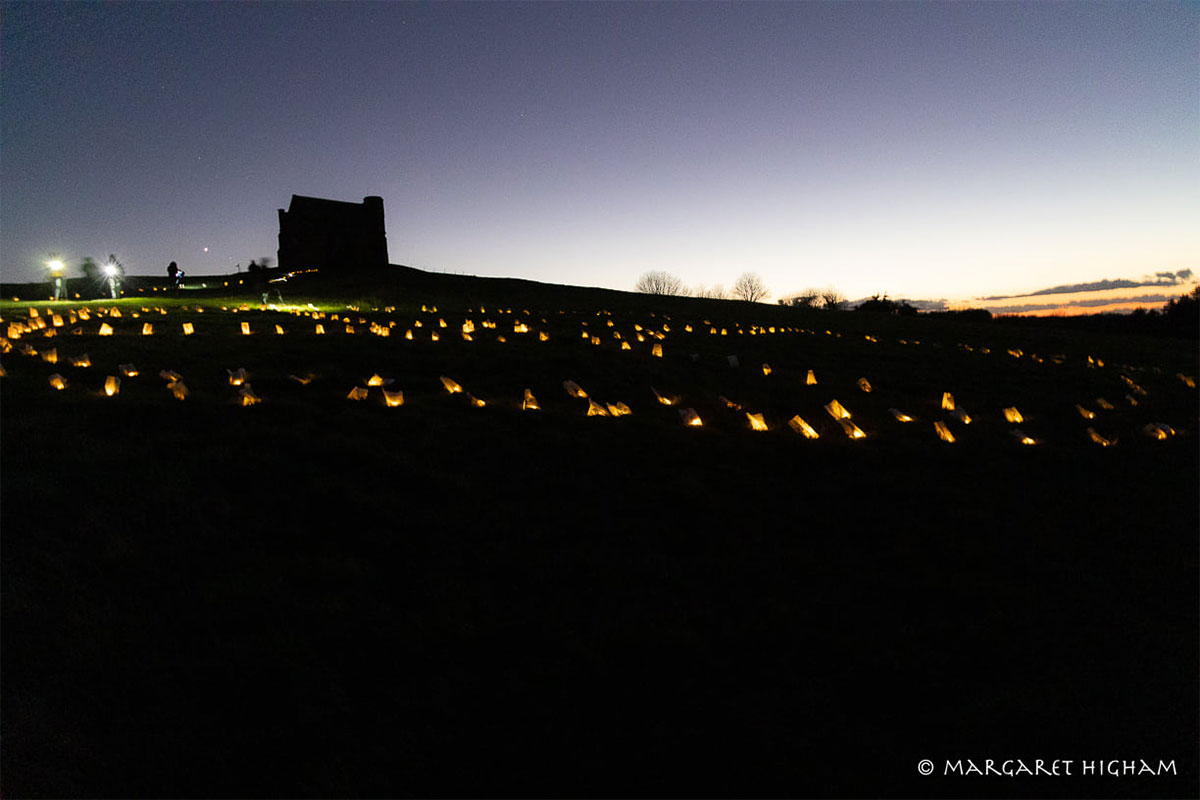 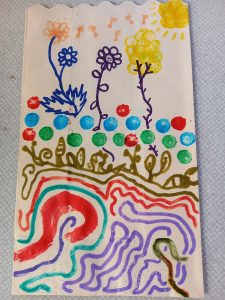 Bag created in the workshop 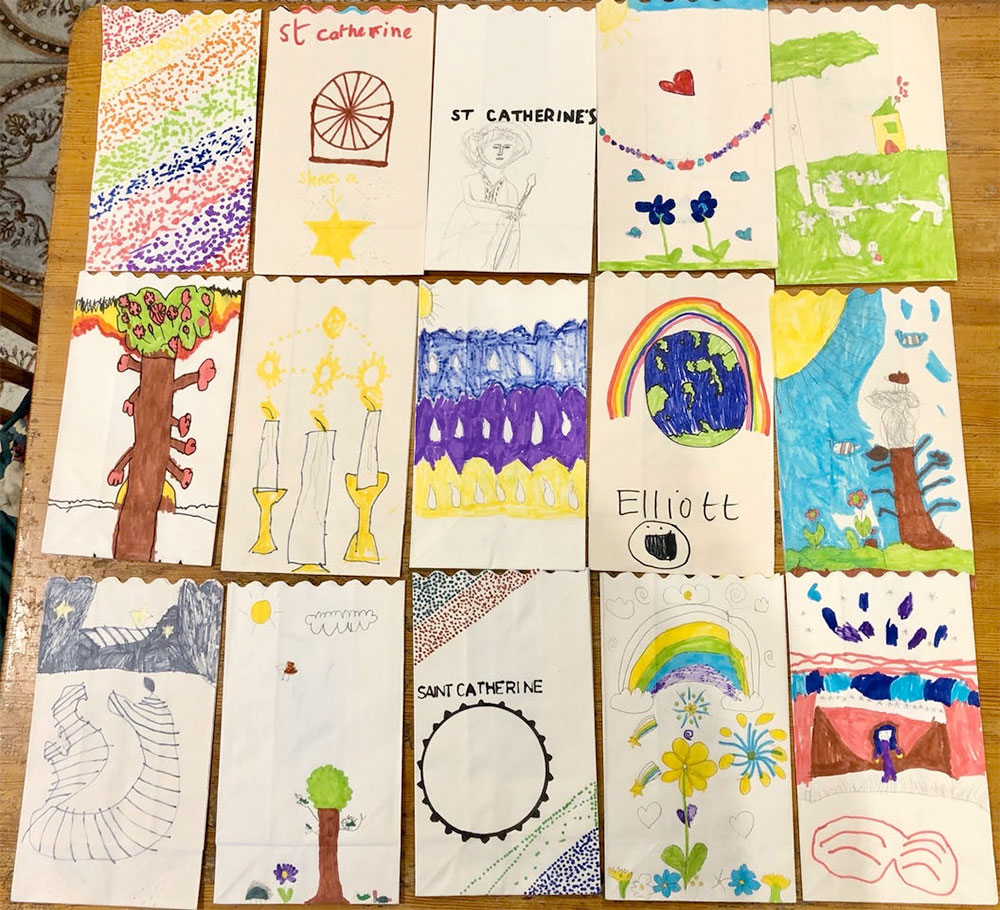 Here are some of the candle bags decorated by Thorners School prior to their inclusion at the Candles on the Hill event. 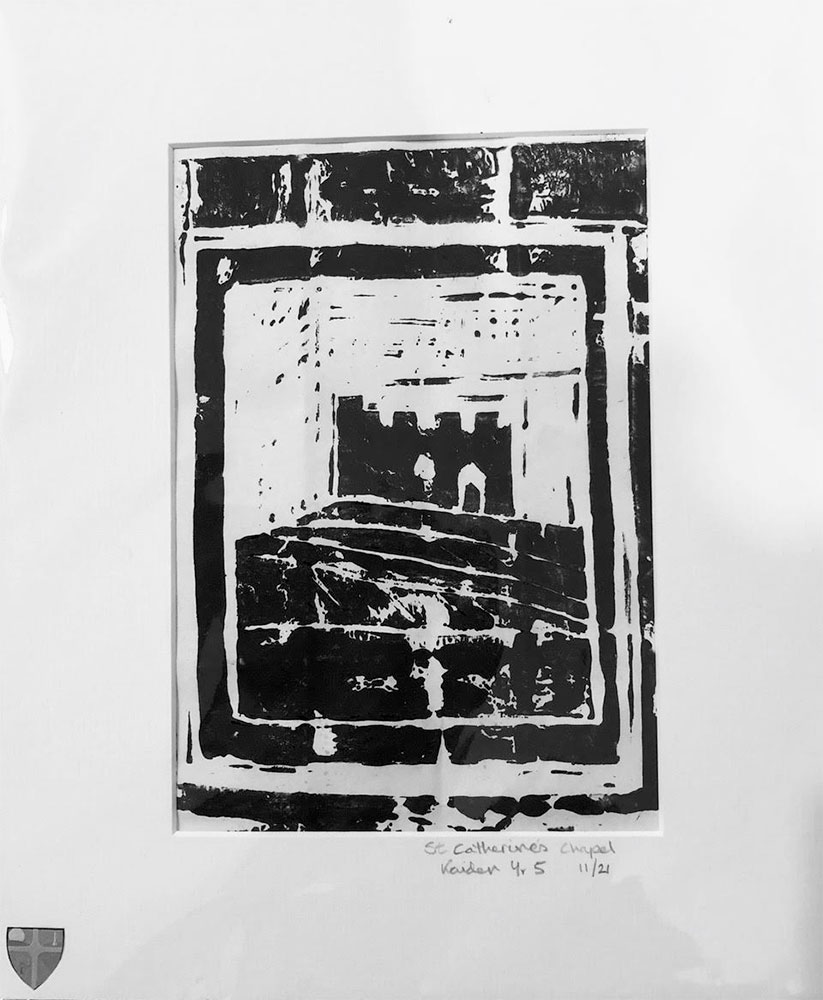 A candle bag design by Kaiden, year 5 at Portesham School. 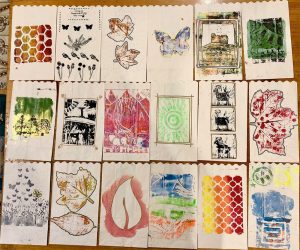 Above are some of the candle bags decorated by Portesham School.

Candles on St Catherine’s Hill is an annual event, initiated and managed by Abbotsbury Tourism and Traders Association in 2018 to celebrate the Saint Day of St Catherine of Alexandria, 25th November. It takes place on the nearest Sunday, and there is normally a service that afternoon, inside the Chapel, conducted by the Vicar of St Nicholas Church, Abbotsbury.

A large circle of light is created to represent the wheel on which, according to legend, St Catherine was tortured for refusing to renounce her Christian religion. The path from the village towards the Chapel is also lit.

The community is invited to decorate paper candle bags in advance to form the lighting.

Inspiration for this project, initially titled Candles on the Hill came from three local events which happened in the past:

Many years ago, one winter evening, brown paper bags with candles in jam jars were placed alongside the path, leading to an Abbotsbury Music concert in the Chapel.

Several years later, during the summer Abbotsbury Arts Weeks, an annual event using lanterns along the path was organised by Friends of St Nicholas. When they discontinued the event the lanterns were donated to The Sub-Tropical Gardens.

Finally Abbotsbury Music funded an art installation by Robbie Colman. He placed a glowing sixty foot diameter circle of blue neon tube on the hill. This was likened by the press to a landed space ship! It was spectacular and created a great deal of interest nationally.

In 2020 the Candles on the Hill event during lockdown, on St Catherine’s Hill, Abbotsbury, was managed by a separate entity. ATTA takes no responsibility for the activity in Abbotsbury on that day in 2020. ATTA has no interest or responsibility regarding complaints or actions arising out of the way this event was staged, sponsored or marketed.